It Started with a Whisper by Shannon McCrimmon 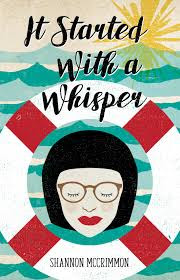 Title: It Started with a Whisper

Five simple words: That’s all it takes to change the course of 18-year-old Josie Graham’s life in the summer of 1989.

Josie is a musical prodigy: She can sing, play guitar and is a natural on the piano. Instead of spending her last summer before college traveling the country with her rock star father, she’s made a last minute decision to spend it working at her Aunt Bernie’s inn, in Ambler’s Fork, North Carolina. But what could have turned her life-long passion for music into a hatred for an industry she’s worked so hard to get into?

Her aunt’s inn seems like the perfect place to escape, to clear her head and figure things out, but on her first day there, she almost drowns before Chic Hobbs saves her.

Chic wants nothing more in life than to leave Ambler’s Fork and his sordid past behind—at least not until that day Josie Graham swims into his life. The problem is, Chic’s got a secret. It’s a secret he’s keeping from Josie, and he’s worried if it gets out, it’ll ruin everything, and she’ll judge him for his past mistakes the way everyone else in town has.

Josie is carrying a burden of her own. One that made her run to Ambler’s Fork – away from her family and everything she’s ever known.

Chic saved Josie once. Can he save her again? Or will Josie rescue him this time?

Shannon McCrimmon's 7th novel, It Started with a Whisper, takes place at a North Carolina lake resort during the summer of 1989. Josie, hiding a secret, decides to work at her Aunt Bernie's inn instead of going on tour with her rock star father. Chic is the boy who literally saves Josie's life (and steals her heart) on her first day there. Chic is fighting his own demons as he works for Bernie and also helps his father at the family canoe livery. Together the two embark on their blossoming relationship and tackle saving Bernie's floundering inn and in return Chic's father's canoe business.

It Started with a Whisper is a wonderfully written tale of love, redemption, and forgiveness. I enjoyed watching the relationship between Josie and Chic unfold. What started as two people not looking for love grew into a story of Josie and Chic helping the each other deal with their unresolved issues. McCrimmon did a wonderful job with character development. Each character, even minor ones,were fully developed. I also enjoyed watching the mystery of Chic's father unfold. Throughout the whole novel Chic's father was hard and unforgiving. He openly judged Chic and the choices he had made. However, when his father's backstory was revealed he became more human.

My favorite relationship in the novel was between Chic and his brother Dunny. Dunny was Chic's older brother yet mentally he was like a 3rd grader. Dunny loves Star Wars, comic books and music. Chic was Dunny's protector, friend, and brother. Their relationship was endearing and wonderful to read about.

Shannon McCrimmon's It Started with a Whisper is a wonderfully heartwarming read. It's full of highly likable characters, a realistic plot, and a perfect ending! Here's hoping for a sequel!!!!!

*I have been provided a complimentary copy of the book, It Started with a Whisper, for the purpose of review.*