Outside In by Doug Cooper 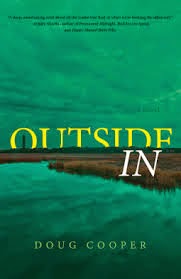 From Memorial Day until the student workers and tourists leave in the fall, the island community of Put-In-Bay, Ohio, thrives on alcohol, drugs, sexual experimentation, and any other means of forgetting responsibilities. To Brad Shepherd--recently forced out of his job as a junior high math teacher after the overdose death of a student--it's exactly the kind of place he's looking for.

Allured by the comfort and acceptance of the hedonistic atmosphere, Brad trades his academic responsibilities and sense of obligation for a bouncer's flashlight and a pursuit of the endless summer. With Cinch Stevens, his new best friend and local drug dealer, at his side, Brad becomes lost in a haze of excess and instant gratification filled with romantic conquests, late-night excursions to special island hideaways, and a growing drug habit. Not even the hope from a blossoming relationship with Astrid, a bold and radiant Norwegian waitress, nor the mentoring from a mysterious mandolin player named Caldwell is enough to pull him out of his downward spiral. But as Labor Day approaches, the grim reality of his empty quest consumes him. With nowhere left to run or hide, Brad must accept that identity cannot be found or fabricated, but emerges from within when one has the courage to let go.
My Thoughts:

Outside In, by Doug Cooper, is a novel set in a very familiar place to me.  Growing up in Ohio, Put-in-Bay has always been a well-known destination that is known for its crazy days and even wilder nights.  Cooper had it right when he mentioned that once you step onto the island you forget that you're in Ohio.  You really feel like you are on an isolated island where the sky is the limit.  Put-in-Bay is a very touristy location and Outside In describes it perfectly.

Brad fled to Put-in-Bay after he went through a very traumatic experience.   In his ‘old’ life he was a Math teacher and he seemed to enjoy his job and the kids he taught.  However, when a student in his classroom dies of a drug overdose he blames himself for not doing enough.  Should he have gotten the nurse sooner?  Did he ignore the signs of trouble?  Could he have done more?  After it is evident that his administration is not behind him, Brad makes the decision to leave teaching in order to find himself.  Living in St. Louis, Brad had never heard of Put-in-Bay; however after becoming friendly with a band he decides to follow them to the island for the summer.

Having been to Put-in-Bay several times myself, I could easily picture the places that Cooper wrote about. Put-in-Bay really is a beautiful location. Once you step onto the ferry and leave the mainland behind a new attitude comes over you. Your every day stresses and worries vanish as you look forward to all of the fun that is about to be had. The only way on and off of the island is the ferry or Jet Express.  There is also an airport that is used for emergencies and other island needs.  There are not many cars on the island; you get around by walking, biking, or driving golf carts.

Cooper hit the nail on the head when he wrote about the excessive partying.  The streets are lined with bar after bar and you can literally step out of your hotel room or cabin at any point and find people drinking.  ‘It's 5 o'clock Somewhere’ is definitely the slogan on Put-in-Bay.  People flock to the island to celebrate birthdays, anniversaries, weddings, or to throw bachelor or bachelorette parties.  It is also a getaway for those that have a weekend off in the summer.

It is on Put-in-Bay that Brad goes through some major changes.   In his old life Brad would drink every now and then but he remained in control and responsible.  However, in his new life readers find Brad piling cocaine, ecstasy, mushrooms, pot, and alcohol into his body 24/7.  He definitely enters a party hard stage to try and forget his past. He doesn't want to think about what he is going to do next with his life.  Throughout Outside In, Brad is on a journey of self-discovery.  While he goes through many struggles, at the end of the book Brad believes he has discovered who he is.

Before reading Outside In I had never given much thought about the island workers or their lives and where they lived.  However, reading this book has really given me a whole new appreciation of who resides on Put-in-Bay. I could definitely see the party atmosphere growing old very quickly. In the novel, Cooper says that four months on the island equals a year of living. This makes total sense to me and is easily seen as the characters in Outside In party to oblivion.

I really enjoyed Doug Cooper’s Outside In.  The characters were well-developed and Put-in-Bay was described masterfully.  Cooper painted real places like the Roundhouse, Boardwalk, and winery perfectly.  I could truly see each and every place as Brad and his friends visited each. If you are looking for a coming of age story to read this summer then Outside In is for you.

*I have been provided a complimentary copy of the book, Outside In, for the purpose of review.*